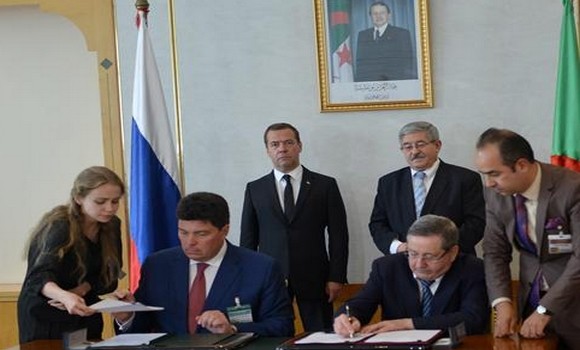 The first agreement, inked by Minister of Justice and his Russian counterpart Alexander Konovalov, provides for judicial cooperation between the two countries, particularly in criminal matters.

The second agreement, signed by Minister of Health, Population and Hospital Reform Mokhtar Hasbellaoui and Russian Minister of Health Veronika Skvortsova, includes an executive program of cooperation in the field of health.

Another agreement on an executive program of cooperation in the field of vocational training was inked by Minister of Vocational Training and Education Mohamed Mebarki and Russia’s Deputy Minister of Education and Science Lyudmila Ogorodova.

The MoU provides for the exchange of experience in the field between the two countries.

Another MoU in the field of pharmaceutical industry was signed between the Algerian private company Biomap and the Russian private firm Biocad.

The signing ceremony was attended by Prime Minister Ahmed Ouyahia and his Russian counterpart Dmitry Medvedev, as well as several ministers from the two countries.

Algeria to attend the STC 2nd Ministerial session on Migration, Refugees and...