After the mission carried in August, followed by the immersion course of the Ugandan Police in Algeria, a second mission of high ranking Algerian Police will sejourn in Uganda in order to implement the cooperation Action Plan reached jointly on the basis of the MOU signed in Algiers in July 2016 by the General Director of the National Security of Algeria, le General-Major Abdelghani HAMEL and the Inspector General of Police of Uganda, the General Kale KAYIHURA.

This cooperation comes within the framework of strengthening the ties of cooperation and solidarity in the field of security agreed to during the 4 day State visit of President Yoweri Kaguta MUSEVENI in Algeria in October 2015. 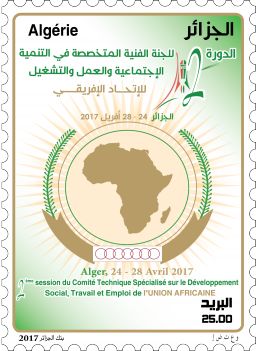 Algerian postage stamp issued on the occasion of the meeting.

The Commissioner for Social Affairs, H.E. Mrs. Amira El Fadil, held, on April 27th in Algiers, a meeting on with Minister of Culture, H.E. Mr. Azzedine Mihoubi, in the Ministry of Culture and discussed on the modalities of the establishment of one of the African Union Flagship Projects, the Great Museum of Africa.

During her meeting with the Minister, H.E. Mrs ElFadil was informed about the concrete steps taken by the Government of Algeria to build the museum.

H.E. Mrs. ElFadil was pleased to see from a distance, on the shores of Mediterranean Sea, the plot of land earmarked by Algerian government.

During their meeting, H.E. Mrs. El-Fadli and Honourable Minister, Mr. Mihoubi discussed other cultural issues such as the protection of African cultural heritage and empowerment of cultural institutions.

Following their meeting, they jointly inaugurated the opening of the 3rd Exhibition of the National Copyright and Adjacent Rights Authority. The event was colourfully organized and comprised of exhibitions and performance by different cultural groups. These include, musicians, artisans, cinema and theatre and literation among others. Other countries also such as Morocco, Tunisia, Cameroon, Ethiopia and France participated in the exhibition. 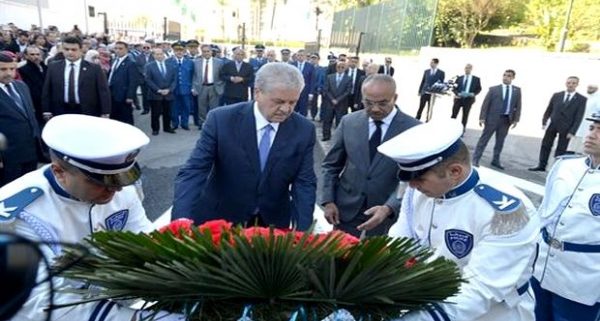 Prime Minister Abdelmalek Sellal has paid tribute to the memory of the victims of the bombing that targeted the Government Palace in Algiers on 11 April 2007.

During the ceremony, a wreath was laid at the entrance of the building and Al Fatiha (The Opening chapter of the Holy Qur’an) was read in the memory of the victims.

In a statement on this occasion, Sellal reiterated the Government’s solidarity with the families of the victims.

“Algeria is enjoying today security, peace and stability thanks to the sacrifices of its children, whom we will always remember.” said the Prime Minister.

At the end of the remembrance ceremony, Bedoui received the families of the victims and listened to their concerns regarding their social situation. They, however, expressed satisfaction at the solidarity of the Government since the terrorist attack to date.

Twenty people were killed and over 200 others were injured in the Government Palace attack. 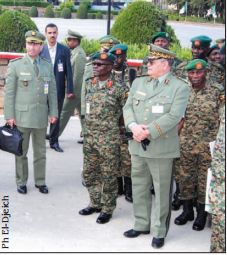 As part of the consolidation of military cooperation Between Algeria and Uganda, a delegation from the “Senior Command and Staff College – Kimaka” (Uganda), led by Brigadier BBosa Christopher Kiyingi, paid a visit to Algeria from 03rd to 07th April 2017.

During their stay, the delegation visited many military training centers.

The delegation was received at the Cherchell Military Academy by its Commander, the General-Major Ali Sidane, for :

At the School of Command and staff College, which is a tool of military training excellence in the tactical and organizational fields, the delegation heard :

Among many other activities, the Study Tour programme of the the delegation included :

The military delegation from Uganda had also the opportunity to visit several cultural and Tourist sites, and the National Army Museum.

Algeria will host the 2nd Session of the African Union’s specialized technical committee on social development – STC –SDLE in Algiers from the 24th to the 28th April 2017 under the patronage of President Abdelaziz BOUTEFLIKA.

The Session will be under the theme “Investment in employment and social security for harnessing the demographic dividends”.

The meetings will be scheduled as follows:

This meeting will offer the participants the opportunity to share experiences in the fields of Social Development, Labor and Employment and to focus on the benefits and investments to be realized with a view to speeding up the demographic transition process as well as discuss relevant solutions that would create more decent jobs, notably for the youth, women and persons with disabilities and reduce poverty, inequalities and forced migration.

Algerian postage stamp issued on the occasion of the meeting.

Libyan Foreign Minister Mohamed Tahar SIALA commended , in New York, Algeria’s “permanent” and “unfailing” support to Libya, voicing wish that Algeria plays a “greater role” in the restoration of “peace” and “stability” in this neighbouring country.

The wish was expressed during discussions with the Minister of State, Minister of Foreign Affairs and International Cooperation Ramtane LAMAMRA about the latest developments in Libya, held on the sidelines of a general debate at the 71th session of the UN General Assembly (September 20-26).

The discussions also focused on “the actions of the UN, the African Union and the Arab League, in addition to Libya’s role within those Organizations.”

LAMAMRA reiterated Algeria’s position of principle which against foreign interference and in favour of the all-inclusive national reconciliation process in Libya, and for a political solution to the crisis, the foreign ministry underlined.

Minister of Energy Noureddine BOUTARFA took part in Abidjan, Côte d’Ivoire, in the 34th ordinary session of the Ministerial Council of the African Petroleum Producers Association (APPA), which was held today in Abidjan.

The APPA ministers will address organizational issues, activity reports and the draft budget 2017-2018.

The latest developments of the oil market will also be high on the agenda of the ministerial meeting.

The inter-governmental organization, based in Brazzaville, promotes joint initiatives in terms of management policies and strategies in oil industry.

A delegation of the League of Ulemas, Preachers and Imams of Sahel countries expressed Tuesday its admiration for the Great Mosque of Algiers, describing it as a “huge project meant to be a citadel of moderation in Africa and the Mediterranean.”

In a visit to the Great Mosque of Algiers project, the members of the delegation said the mosque was among “the greatest religious projects worldwide.”

It is “meant to be a citadel of moderation in Africa and the Mediterranean” they added.

The Senegalese representative at the League said the mosque “will be a beacon of knowledge and a religious centre for Africa and Europe given its strategic position and the resources made available for its building”.

Chadian representative stressed Algeria’s efforts “for the consolidation of the moderate religious position in the Sahel region and Africa” . The new mosque of Algiers, he said, will have an outstanding impact and will be a favourite destination for the Ulemas of Sahel and Africa.

The League’s secretary general, Youcef Belmahdi, said “the huge project reflects Algeria’s and position in favour of the values of cooperation tolerance.”